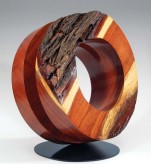 Jim Keller’s transition from a 42-year career as a civil engineer to recognised sculptor whose works are exhibited in museums and leading galleries has been an inspired journey.Profile by Kevin V. Wallace.

His life long love of wood led Jim Keller to explore the natural beauty of the material to create sculptures that focus on visual dynamics and negative space, as well as works in bronze.  ‘My journey with contemporary sculpture has been filled with joy, surprises and excitement,’ says Keller. ‘If someone had told me during my thirties that this civil engineer would spend some of the most joyous years of life as a sculptor, I would have questioned their sanity.’ Keller suspects that his affinity for wood is hereditary, as his father and both grand fathers were carpenters. As a child, scrap lumber from residential construction sites were worked with at home. At the age of 10, he was proud to be paid to swing a hammer while assisting his father install cedar shake siding on a garage he was building. The skills learned in childhood served him well and during college vacations he worked as a carpenter framing houses. As a high school student, Keller’s ambition was to become an architect, but he instead studied Civil Engineering and graduated from Valparaiso University. He enjoyed a rewarding career as a professional engineer, working on a diverse range of projects from municipal infrastructure to Navy nuclear training facilities, NASA Space Shuttle facilities and off-shore oil production projects.   In 1992, Keller received a lathe as a birthday gift, having never used one before. He bought a starter set of turning tools and became a self-taught amateur woodturner. ‘The learning curve proved steep,’ he recalls.

DEREK WEIDMAN: CIRCLING NATURE The work of Derek Weidman builds upon traditions of art in wood ...

Between Creation and Decay THE WOODWORKING OF ELEANOR LAKELIN From her recent work it might see ...

Segments of Daily Life THE ARTFORMS OF CURT THEOBALD Inspiration for Curt Theobald stems from d ...