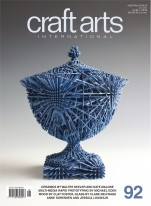 THOUGH the content of this publication is usually diverse,the line-up of articles in this issue spans the full breadth of artistic object making, from 18th century Folk Art to the rapid prototyping and addive 3D printing of today. The advent of new tools,materials and processes will continue to impact on the lives and work of artists and designer/makers but should not necessarily result in the neglect of important traditional knowledge and skills.Folk Art thrived in earlier times because much of it was in the form of trade or shop signage for goods and services –large wood carvings of painted top hats, gloves, shoes, teapots and cutlery–which gave instant street recognition for the major segment of the population who were illiterate. Some of these huge objects bear a curious likeness to subjects often depicted in the 20th century Pop Art movement that emerged in the Sixties and Seventies.Combining drawing, 3D software and manual skill with digital technology inspired former ceramist Michael Eden to improvise hither to unprecedented means of making real objects based on imagined images in virtual reality. Despite this extraordinary achievement, Eden is convinced that working exclusively in the virtual world of the computer cannot teach you about materials and processes. It has to be underpinned by working with the hands,testing materials and exploring processes. In other words, learning by doing.

THIS is the last issue of Craft Arts International that Jenie Thomas and I will publish. It was ...

During the 31-years that Jenie Thomas and I have been at the helm of this magazine there has ne ...

DESPITE the vagaries of the global economy there are some positive signs that the potential mar ...

THIS issue marks an important transition in the magazine’s 30-year history. It is the first edi ...