Peter Rushforth is Australia’s most esteemed potter, yet despite his countless achievements and international recognition, it has been almost three decades since a gallery staged a major exhibition of his work.4

THROUGHOUT Peter Rushforth’s distinguished career, serendipity has been his steady companion: from his early years growing up in the beach side suburb of Manly through to the idyllic existence he and his wife Bobbie have found in the serene enclave of Shipley in the Blue Mountains west of Sydney. Rushforth’s choice of career as a potter – in particular his preference for the capricious nature of wood-fired ceramics – has been, in some respects, an audacious challenge to the mercurial nature of what we call fate.
Born in 1920, Rushforth fondly remembers a childhood filled with warmth and love; however the disappearance of his father after a fraught return from the battlefields of the Great War, left the  young boy with an abiding sense of responsibility for his mother Phyllis and sister Judy.At the age of 14, following the death of his cherished mother, he was obliged to leave high school after only one year and take up a position as a trainee theatre manager at Fox Films, where a relative had secured employment for him.

To read the complete article purchase Back Issue #88. 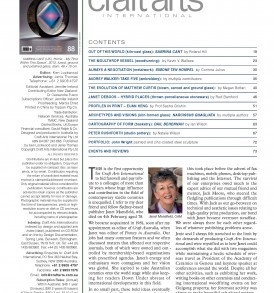