THE GLASS SCULPTURES OF FIAZ ELSON

Fiaz Elson’s background is both East and West, a duality that, for the artist, is a fruitful source of inspiration in the creation of elegant and beautiful sculptures in cast optical glass. Text by Jennifer Hawkins Opie. Photography by Simon Bruntnell. FIAZ Elson took some time to realise that glass was to be her material. She was born in Stoke-on-Trent, the
centre of the British “Potteries” and a city with a long history of industrial ceramics’ manufacturing, albeit one that was already dwindling. She took a long route to glass, but her moves from one course to another, around several of the key colleges in Britain’s Midlands, now read as a series of stepping stones to an inevitable destination.
She enrolled on the Fashion & Design course at Burslem College of Art in 1989 and, as recently as 2009, she was still referring to her ‘great passion for pattern, texture, colour, form and material’1. During the early 1990s Elson moved to the Art & Design course at Leek College of Art followed by Ceramics & Silversmithing at Newcastle College of Art & Design. Then, in 1998 she signed up for a BA degree course in Crafts at Staffordshire University. After the first glass module she was completely won over. She describes finding the ‘casting process fascinating and soon [she] defected along with several other students to the glass department,’ where she studied under Shital Pattani.

To read the complete article purchase Back Issue #91 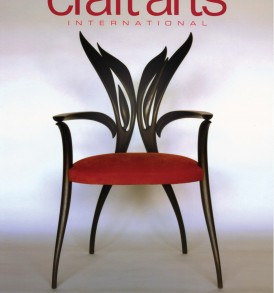 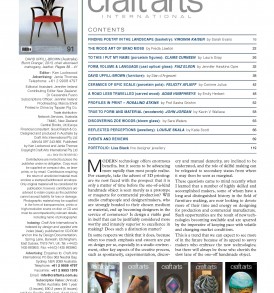