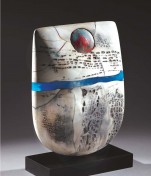 The ceramic sculptures of Peter Hayes are replete with texture, patina and lustre, often with inclusions of metal components such as copper and brass as well as marble and other stones in their composition. Text by Tim Saunders.

CANALS and navigations play a significant part in the ceramics of Peter Hayes, who lives in Bath where there are lots of waterways. When the canals were being built the navvies would deposit a ton of clay every third of a mile
along the side to stop spillages and flooding. Hayes discovered these little mounds and collected the clay for use in his studio. ‘It has been on the surface exposed to the elements for 50 years so it is weathered and beautiful and this positively affects the look and finish of the end product. I call it my Canal Clay and I don’t remove any of the stones that are in it but mix it all together. I make my bases and a great many sculptures out of this resource.’ He adds: ‘The reason I work in clay is that when I was a student I could literally dig it up and make something. It is supple and easy to work with and a blank canvas.’ Today his work can be found in major public and private collections throughout the world. But he still enjoys the process of digging it out –‘It’s a very primitive activity.’In addition to his local supply, Hayes also uses clays from all over the world, including Australia. As a student he took part in archaeological digs during which he discovered all manner of ancient pottery shards,which inspired him to incorporate bits of metal into the making process.For instance, with his porcelain forms he sometimes applies copper to the surface of the clay prior to firing.When the copper becomes molten he uses tongs to extract the piece from the kiln and plunge it into sawdust, which starves it of oxygen and produces some fabulous lustres. Minerals, such as iron and copper, that are introduced into the raku process have their own effect on the colours and patterns on the clay.This erosion process continues with sanding so that the texture and cracks do not interrupt the surface but become an organic, integral part of the patina. Each piece takes on its own developing surface, its own history and its own unique aesthetic.The sources of Hayes’inspiration are diverse.He picks up ideas during his many visits to Canada, America, Israel,Japan, Korea and Egypt.‘Objects evolve through creative thinking,’ he says. ‘My aim isn’t to compete with nature but for the work to evolve within the environment. I’m naturally drawn to the shapes of artefacts and objects from other cultures and times –but which remain timeless.’ Several different types of clay are used by Hayes, ranging from smooth semi-porcelain for his raku ware through to china and stoneware. Each type of clay has its particular demands and requires varying degrees of time to produce a finished work. He never works on one piece at a time,instead preferring to be engaged on as many as 15 pieces simultaneously, ‘which spreads the knowledge’.