MAKING –THE WORLD OF THOMAS HEATHERWICK

MAKING, which only recently was regarded as an anachronistic and outdated activity in Western culture, is now fully re-established as a powerful human driver.One of the leading proponents of designing though making is Thomas Heatherwick, now the subject of a major exhibition “Heatherwick Studio: Designing the Extraordinary”(sponsored by Ernst &Young) at the Victoria & Albert Museum, London until 30 September, 2012. This 42-year-old artist/designer has been described by Sir Terence Conran, one of his earliest clients and supporters, as “the Leonardo da Vinci of our times.”In his 18-year career Heatherwick has acquired the reputation of a wunderkind. He started with a gazebo for Conran (1994), but along the way to his award winning best-in-show British Seed Cathedral Pavilion(2007) for the Shanghai 2010 Expo, he has designed everything from art installations such as Laing Square, Newcastle(1995),to a zip handbag for Longchamp (2000), their New York showroom (2004), a spinning chair (2007), a Buddhist temple in Japan(2001)through to the new London Route -master bus (2010). His latest design is the flame crucible for the opening of the London 2012 Olympics Games. Amongst a host of other ongoing and potential projects he is currently building a university campus in an Asian city in (he won’t specify which), has two buildings onsite in Shanghai and a housing project in Kuala Lumpur. His designs are engaging and surprising, but unlike some designers or architects there is no identifiable Heatherwick aesthetic; what his designs share is an unlikely out -come. This is Heatherwick’s trademark, achieved through his ability to persuade others to back him no matter how unusual or radical the design.
Heatherwick’s roots are very much in making. Born in to a family of designers, artists and social innovators, he grew up drawing and making. From an early age, he says he ‘was convinced that it was essential to understand materials and gain practical experience of them, in order to develop ideas and find ways of making them happen,’ a kind of thinking through making. His mother’s mother, Elisabeth Tomalin, was a renowned textile designer, turned art therapist and his mother Stefany, a leading specialist on bead jewellery, who took the young Heatherwick to see and experience all sorts of craft and making techniques.‘My mother trained as a fine artist, but for her there was something too elitist about that so she turned to craft. ’This public awareness is part of the family ethos.

To read the complete article purchase Back Issue #86. 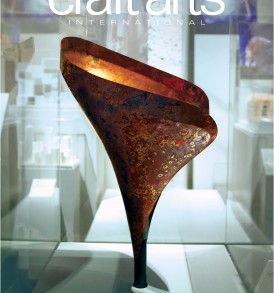 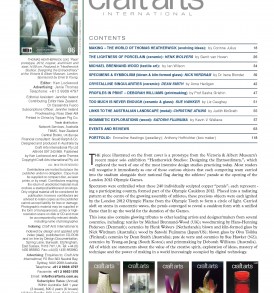